In which I take a time-out 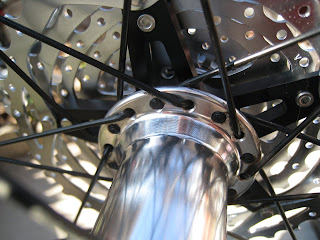 ...from writing, in order to do this. I built wheels!
Posted by clairification at 12:36 AM No comments: Links to this post

Our writing group had the wonderful idea of sharing a bit of our juvenilia tomorrow, so I've just spent an hour going through the files I kept of my pre-teen stories. Which are extensive. And--shocker!--awful.

Picture, if you will, reams of three-ring notebook paper, solid-blocked with paragraphless blue ballpoint, script veering crazily through the three different handwriting styles I was trying on for size. Doodles on every available margin (UFOs, birds, eyes, hearts, coffins, and my name paired with the surname of a guy from my sixth grade class).

This manuscript is my first novel, The Five Realms, begun when I was eleven. It features twelve different protagonists, none of whom know each other until they're thrown together on a massive world-saving quest. I wrote everyone's origin story and most of the introductions, and then I skipped straight to the (tragic) ending. (I figured the part in the middle would be easy to fill in later, since it mainly consisted of the cast riding around killing monsters.)

Since I'm a masochist... have some sample prose!

"Her eyes were brown, glimmering with unshed tears, and the set of her red-lipped mouth was full of desperate courage as if it was a last stand. Her dark gold hair was whipped around her face by the wind of war."

"He was utterly sizzled. His flesh had melted to the stones of the street and couldn't be scraped off. The body had to be left on the street until it disintegrated."

And this adjectival bit of cliche bingo:

"It was sunset on the Plains of Akhna, and the blood-red rays of the dying orb lit the barren land with a fiery light. The Company rode across the wasteland at great speed, forming a fierce picture: twelve terrible figures, armed to the teeth, galloping over the flat plain like a wind through grass. Then one broke away from the rest, spurring his tired horse to greater speed, desperate to reach some unknown goal..."

Oh, and I didn't know how to spell quite as well as I thought I did--poor Cheif Preist!
Posted by clairification at 10:35 PM No comments: Links to this post

clairification
I write, read, and also do other things related to books. The views expressed on this blog are mine alone and do not necessarily reflect the views of my employer.

Other Places You Can Find Me